The Custer County Foundation held their annual Scholarship Award Ceremony on Sunday, March 29th. Due to COVID-19, the ceremony was not able to be held as planned.  Therefore, the Board of Directors decided to host the ceremony as a Facebook Live Event. 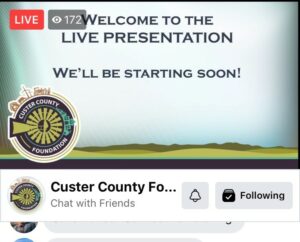 Lindsay Divan, Executive Director of the Custer County Foundation, welcomed the estimated 180 viewers and thanked them for watching from the comfort of their homes.  She thanked KBBN/KCNI for assisting with the broadcasting.  It was announced that 83 scholarships would be awarded to 69 students for a total amount of $106,600!  Scholarships, offered through the Foundation, are for various fields of study including: nursing, veterinary medicine, journalism, lineman, and cosmetology, to name a few.  Scholarships are available for four-year and two-year degrees.  Lindsay went on to explain the selection process and thanked the scholarship committee for their hard work and dedication in selecting the recipients.  Nearly 730 applications were received, and selecting the recipients was not an easy task.

Viewers were asked to comment throughout the ceremony.  As an incentive, each comment was entered into a drawing, in which 15 gift cards to Custer County businesses will be given away.  Board Members, Alicia Hermsmeyer and Deb Girardin, assisted in announcing the recipients.  After all the awards were presented, the guidance counselors were thanked for all the assistance they offer the students with the application process.  The Board of Directors was also recognized. To close, graduates were wished best of luck as they begin new chapters in their lives.

Everyone can agree this is not how we planned to have the scholarship ceremony.  However, the students, parents, and donors made the best of the situation.  There were over 600 comments during the Facebook event with students congratulating one another.  It was fun to see the support from everyone.

It gave the seniors something to look forward to in a time of uncertainty.  It also allowed donors, who aren’t able to attend the ceremony, the opportunity to watch it.  Donors, who live on the east and west coasts, and normally can’t attend the ceremony were now able to participate.

Even though the ceremony couldn’t go on as planned, it was still exciting to announce over $106,000 in scholarships!  Local students are very fortunate to have such generous donors investing in their future.

The Foundation is grateful for the support they received hosting the ceremony on Facebook live.  It was great to have the viewers engaged and interacting with each other.

Best wishes and congratulations to all of our Custer County High School graduates!